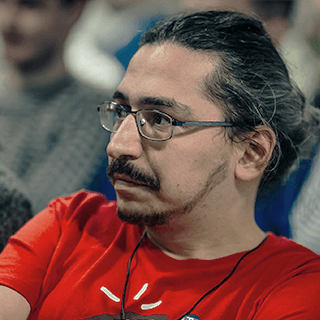 Ruby expert with fifteen years of experience, open-source and open data enthusiast, author of several quite popular gems, mentor for Google Summer of Code. Currently, Victor is proud to work at Verbit.ai.

Victor 'zverok' Shepelev is Ukrainian programmer and poet with eighteen years of programming experience and fifteen years of Ruby programming. He is a huge fan of open source and open data, author of multiple Ruby gems (made it to Ruby News Weekly several times!) and creator of molybdenum project, known for reality—an early effort of making entire real-world data computable and accessible from Ruby.

His project was selected for Ruby Association Grant-2015.

Currently, Victor is proud to work at Verbit.ai, and also mentors programming students. The latter also includes being a mentor for SciRuby (Scientific Ruby Foundation) for Google Summer of Code-2016.

You can read more about Victor and his opinions on various programming topics at http://zverok.github.io/