What programming language to learn in 2019 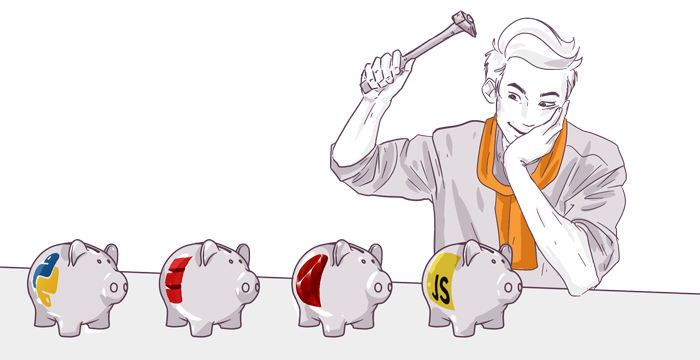 The IT sector is constantly developing and continues to draw attention of aspiring professionals who strive to build careers in this field. Since technologies are always changing, old languages die and some new ones emerge to replace them. What skills should every developer have and what areas focus on to become a successful specialist in 2019?

If you’ve been thinking about your next career move, here’s a little fact you should know: nowadays the world is in bad need of machine learning specialists. Neural nets and AI are not just cool things form sci-fi movies anymore. There are now lots of companies which are ready to pay for the development of self-learning algorithms. According to TechRepublic:

This info is the greatest incentive for you to take interest in this area, learn little by little what AI basically is and acquire the skills needed for a new job.

Let’s have another look at the statistics:

This data is relevant not only for North America, but for developing countries as well.

The constant development of the IT industry results isin constant need of new people. However, knowing how to code on a basic level is never enough for a successful career. The companies are in need of those who can offer unconventional solutions for the problems and thus push the industry further.

What programming language to learn?

Many jobseekers find AI sphere attractive not only because it’s a chance for them to create something awesome, but also because it’s well-paid. According to Indeed the average salary of an AI specialist in the US is $135,000, which is just $5,000 less than the salary of a director of analytics or a principal scientist.

HR specialists say that if you want to be always in demand, you should acquire some additional skills and always know what’s going on in the industry. But what you need to begin with is learning the basics, which is the language you need. According to this poll, these are the most desired languages for a machine learning specialist (from the most desired to the less desired):

Even if you are not into machine learning, you can build a successful career in programming knowing at least one of these languages. Let’s talk about each of them.

Python is a general-purpose language used not only for self-learning algorithms, but also for other tasks such as web apps, server software and multimedia services development. Python became insanely popular in 2017(coinciding with the boom of machine learning), and 2018 only strengthened the trend.

Such large employers as NASA and Google are extremely interested in attracting developers who know Python. It’s also worth mentioning that this language is well-suited for beginners. Here are some of its features:

This programming language with a brief and concise name was designed for use in data analysis, statistics and statistical software. Over the past 5 years the interest in R (as well as the demand for those who know it) has been growing rapidly. R is less known than Python, and thus beginning developers less often turn their attention to it. This leads to lower competition among R developers and higher salaries (starts at $57,000).

R was created in the middle of the 20th century, but at that time was used mostly by the people from scientific circles. Later, since this language is well-suited for tasks somehow connected with AI, the sudden outbreak of interest in it was caused by the abrupt boom of machine learning. Business analytics is another promising sphere where R is used.

According to StackOverflow JavaScript is the most popular language, used by 62% of respondents.

Even though there are many JavaScript developers, the market is not oversaturated and here are lots of open vacancies published every day.

An important advantage of this language is that it’s good not only for creating complex machine learning algorithms, but also widely used in web development to make sophisticated interactive components of any level of complexity. We can advice learning JavaScript to the ones who want to know how to create mobile apps and PC games. The average salary of a good JavaScript developer starts at $50,000.

We can also teach you JavaScript Choose a JS mentor

Java is a general-purpose language, too, and is really popular. Its key advantage is that it can be adapted to work with any platform. However, Java can attract not only would-be machine learning engineers, but also backend Android developers or system engineers.

Recently, as many other languages appeared, the level of hype around Java has decreased a little. However, according to the analysts, it’s going to hold its position as the most used in the world for many years to come. The fact that Java specialists were the most required developers in the UK and Ireland in 2018 only confirms this prediction.

Nowadays qualified Java developer can expect a salary of $55,000.

Scala was created in an attempt to replace Java. It didn’t happen, but this scalable programming language has become widely used for execution on JVM. Scala is used by LinkedIn currently, and this fact might lead to the growing popularity of this language in 2019.

Scala has a reputation of a language which is difficult to understand and use, which discourages the people who want to give it a shot. But if you’re ready to try to make your way through these difficulties, you might be able to build a successful career, as the level of competition among Scala developers is relatively low. Their salaries are currently in the top ten in the world, the average annual income of a Scala developer is higher than $60,000.

The languages mentioned above are used in machine learning. But, thankfully, not everything in IT revolves around AI. Even if you don’t want to work with artificial intelligence, you can qualify for a decent salary if you know some of these languages:

‘Experimental’ language designed at Google in 2009. It’s been doing well in the last 10 years and is used actively to support many Google projects and services. Go is a modern language aimed at programming for powerful multicore CPUs. It’s simple and easy to understand and allows effective usage of massive computing clusters, which web-services are based on. Go specialists are in high demand in software development. Moreover, in 2018 they had one of the highest salaries on the market and the situation will probably remain the same for quite some time in the future.

Kotlin is modern, simple and convenient programming language usually used together with Java in one project. Many developers agree that Kotlin provides opportunities which other languages can’t. The only disadvantage it has is that it’s relatively new and for now used mostly for Android apps. However, it might be taken as an advantage. Since Kotlin is not very common, the people who know it are valuable assets and can expect high salaries in 2019, especially if they know Java well, too.

Nothing above caught your eye? What about C? Our mentor Ilya tells why C might still be relevant Read

If you’ve just started, there’s a list of the easiest languages to learn. You’ll need about a month to master the basics, but you’ll have to work hard. After 6 months you’ll be able to even call yourself a programmer. We used this WP Engine review to create the list:

HTML markup is easy, understandable, universal and, what’s important, any browser supports it. You need to know its basics if you’re a programmer or a web developer, as well as a copywriter, a digital marketing and SEO specialist. Knowing HTML is necessary for anybody working with the internet.

PHP is used in general-purpose scripts and is often embedded in HTML. Any browser supports it. Its syntax is just a little bit more difficult than the one of HTML, which makes it a good option for beginners. If you want to stand out in the market as a competitive player, think about learning PHP and HTML both.

Ruby says that it’s ‘A programmer’s best friend’ on its website and it really is. It’s natural to read and easy to write. Despite is simplicity, it’s a high-level language which allows you to write clean and readable code.

Choose a Ruby mentor on mkdev >

In 2019 learning a programming language is a great idea not only for those who strive to be a developer. HTML and PHP open many doors for everybody working in the IT industry, such as digital marketing, SEO and SMM specialists. The efficiency of their work largely depends on the ability to work with specific apps and services and to customize them according to some particular project.

Informational technologies are so integrated in our everyday lives that knowing programming languages is an advantage for any specialist in any field. In 2019 the most popular languages are those that can allow you to create self-learning algorithms (e.g. Python, Scala and R). Java and JavaScript are more universal and more often used in the web-development. If you’ve just started, it’s better to try out the languages with simple and understandable syntax, such as HTML, Python, PHP and Ruby. Knowing how to code some simple stuff, adjust the browser settings and launch a mobile app is necessary not only for developers but for everybody working in IT.