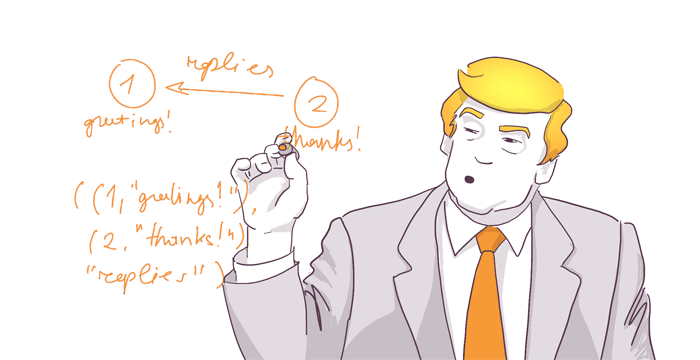 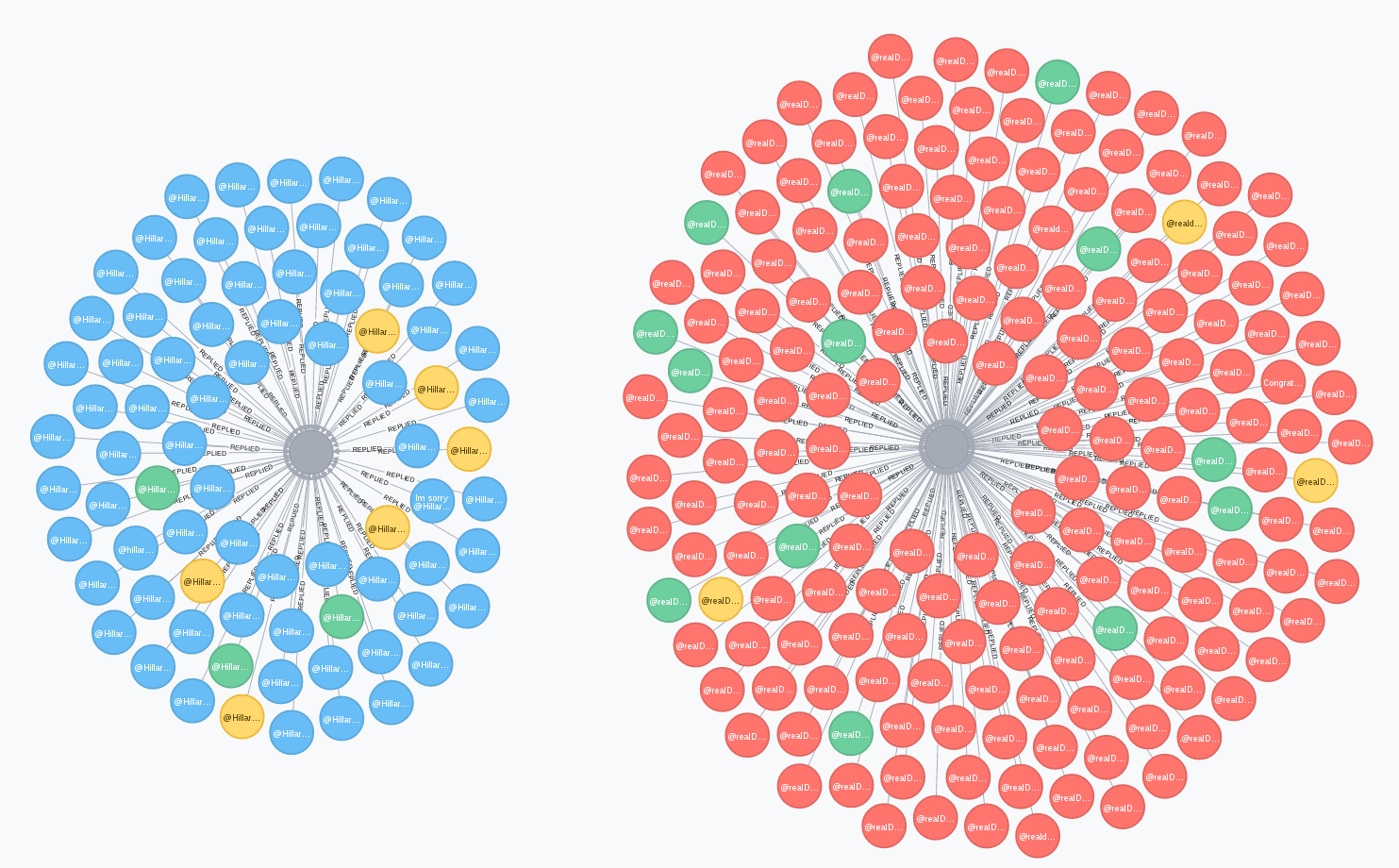 Fig. 1 - The most popular tweets by Hillary Clinton and Donald Trump after the election has ended

Almost right before the election started, I decided that it might have been interesting to analyse what people think and, more importantly, say on this topic. Because, as you know, this election had promised to be an extraordinary one.

This is when I came up with an idea to utilise Twitter's streaming API to continuously save vox populi onto disk for its further analysis. So I had been doing this during a period that spans four days - starting from 7th and up to 10th of November with occasional breaks. When I thought that I already have enough of data for some experiments, an ETL task had been performed and the tweets (which were stored as plain text files) had been turned into a DataFrame compressed with Parquet. This DataFrame has around ten different fields. But for the purpose of this article only these three were used:

Now we have data to play around with. And as the title of the article suggests I will be using Apache Spark GraphX functionality for this purpose. GraphX is one of four components built on top of Spark Core engine and it provides API for processing graphs.

The first step is to prepare data for our graph. So let's create an RDD from the raw DataFrame (file TwitterGraph.scala):

The next reasonable step is to cache the englishTweetsRDD RDD in order to avoid repetitive processing of steps in its physical plan, as it is going to be used multiple times:

Afterward, we define vertices of the graph:

Having vertices, edges, and a default vertex we are finally able to define a graph:

This is a directed acyclic graph. It is directed because an edge represents a response to a tweet. And it is acyclic because a tweet can't reply to another tweet that has been posted after the first one. This is also a property graph because for every vertex and edge there is an attached property. The property of a vertex is a tweet's text. For an edge, it is a type of relationship that connects two vertices.

Now, what can we do with this graph? Well, let's first find the most popular tweets. In order to do this, I will be using inDegrees function, which returns a collection of tuples containing a VertexId and the number of edges pointing to this vertex. Similarly to inDegrees, the Graph has also an outDegrees function, but in our context, it isn't very helpful since a tweet can only reply to one tweet at most.

This got us twenty ids of the tweets with the largest number of replies. Now it would be nice to visualise this data. In order to achieve this, there is a triplets method. What it does in detail you can read here, but in short, it returns an RDD of tuples of three elements containing two vertices and the edge that connects them, like this: 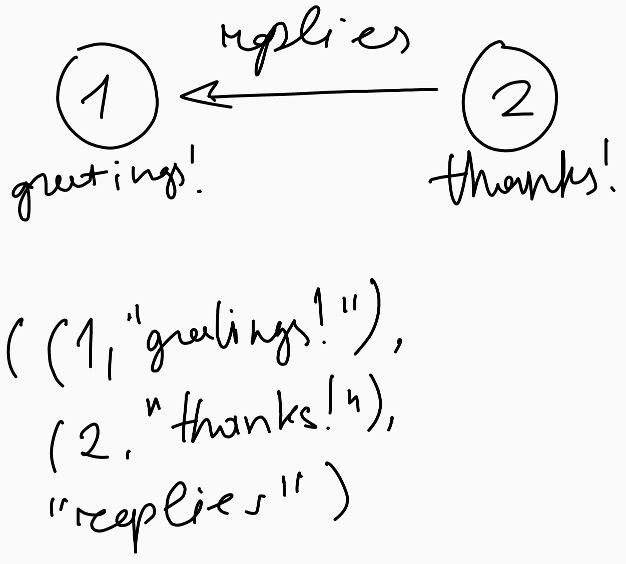 Fig. 2 - Triplet of two vertices and an edge

Now, when we have this data it is finally possible to visualize it. I want this visualization to show relationship between tweets and quickly answer these questions:

I will be looking for answers using Neo4j graph database. And again I'm iterating over the triplets here:

In this query, we create our graph in a local Neo4j database. Pay attention to the getTweetType function (its definition can be found in TweetUtils.scala). It parses a tweet and determines its category: TrumpTweet, HillaryTweet, ElectionTweet (for those mentioning both Clinton and Trump) or CurseTweet (containing offensive language).

Finally, after the program has been executed, we can observe the following picture (high-resolution SVG):

Fig. 3 - Visualization of the graph

So here you can see tweets that mention Donald Trump marked in red, Hillary Clinton - in Blue, both - in yellow, and tweets containing offensive language in green. Any other tweets are grey, as they interest us the least.

The other thing we can find on the graph is the most popular tweet over that period:

And it is this tweet sent by Donald Trump as, by that time already, the president-elect of the USA. An interesting thing to note is the amount of obscene language used in response to this tweet - 13. In comparison, the most popular tweet by Hillary Clinton has only 3 curses in response.

Let's calculate what fraction of all the amount of responses do obscene tweets make up and display this on the graph:

And the output is:

So what can we conclude from these results? I suppose, it is that there were more people who were mad about Trump's victory than Clinton's defeat. Keep in mind, however, that twitter's streaming API only outputs 1% of all the tweets that are posted. On top of that, I'll remind you that there were times when I stopped the streaming process for some time and I'm afraid I missed the most interesting part of those days.

Finally, let's use a more suitable algorithm for counting most popular tweets - PageRank. This is an algorithm that was initially invented by founders of Google back when they were students to improve the relevance of search results in a new type of search engine they were working on. The idea behind it is that a document is more important the more times it is referred to in other documents both directly and indirectly (through other intermediate documents). This video explains it in detail.

Luckily, this algorithm can be applied to any graph and is already implemented in GraphX.

And so we have got ids of 20 most popular tweets using PageRank. Although we have used another approach, the result is the same:

Well, that is not entirely true. If we look closely and compare the top tweets as two ordered lists (as opposed to comparison of the sets above, which are not ordered collections, by the way), we would see that there are two swapped tweets:

Why is there so few differences in the two approaches? The reason behind this is that number of second level replies (reply to a reply to a tweet) in the data set being used is extremely insignificant (again, because of 1% limit that Twitter outputs in their free stream). Furthermore, the top level tweets they reply to are also unpopular (have at most 2 replies) thus having no impact on the actual most popular tweets, which have hundreds of replies:

In conclusion, it's just a small and, hopefully, an interesting fraction of what can be done with GraphX. It also includes other algorithms for operations on graphs comprised of large data sets and I hope that we will see more such stuff in future articles. But that's it for today.